Some of the voices of Jewry (please notice Miss Eagle said s-o-m-e. She always reminds herself that there are lots of Jewish people out there who share her views.) never cease to amaze Miss Eagle.
Earlier this year, Miss Eagle gained a smidgen of notoriety for her support of Michael Leunig when he had an invitation to speak at the Jewish Museum of Australia withdrawn.
Similar movement among Jewry had been seen in 2003, when certain Jews sought to intervene in the awarding of the Sydney Peace Prize to Dr. Hanan Daoud Khalil Ashrawi. Sydney's Lord Mayor refused to attend the award ceremony (she lives in Sydney's eastern suburbs which have a substantial Jewish population) and the NSW Premier, Bob Carr, fielded calls from high-profile businessmen, like Westfield's Frank Lowy, asking him to explain the choice of Hanan Ashrawi for the prestigious prize.
And in the great home in the West for modern Jews, New York, they have been at it again - the Anti-Defamation League and the American Jewish Congress - against one of their own.
Jews ask us never to forget The Holocaust. Miss Eagle doesn't. She also remembers the holocausts of Bosnia, Cambodia, and Rwanda. But, Miss Eagle wonders, why the members of Complaining Jewry cannot also remember their own deprivation in ghettos (and not build their own ghetto in Israel complete with concrete wall); their own deprivation of civil liberties (over centuries, particularly in eastern Europe).
In those days of deprivation, what would they have given to be able to speak freely without let, hindrance or persecution? What would they have given to be able to move freely without let, hindrance or persecution? What would they have given to be able to go about their business freely without let, hindrance or persecution?
The West gave Jewry a liberty not known to them for 2000 years. Can they not reciprocate?
Posted by Unknown at 5:27 pm

The Howard Government wants to give Centrelink the power to apply for warrants - even over the phone - and raid homes.

While Miss Eagle does not support welfare fraud, the Government needs to give statistical and qualitative justification for this extension of police powers. How many cases of fraud uncovered by Centrelink would justify the raiding of homes?

Business now knows that under the Howard Government there is open slather in the workplace. They can do what they like. American Express claims it can't get appropriately skilled workers in Australia and has to import them from Japan. Now Miss Eagle might be a bit naive -but she has done some Economics studies at University level and she has listened to and read all the free market stuff since Milton Friedman became a household name that some of us which we had never heard.
If there is scarcity of a good, the price goes higher. So Amex doesn't get what it wants in this country. The problem may be not that the skills are not here. The problem is more likely that Amex is not prepared to pay - not prepared to pay the market price. Amex needs to learn that if they want the free market they get the whole kit and kaboodle, like it or lump it. But no, they want out from free market provisions that they regard as onerous and want to get skilled labour on the cheap. And the Howard Government has the system that will help.
Then there are the horrific stories coming out as guest workers become a factor in this country: something Australians never thought they would see.
Was a time when Australians and Australian unions supported the White Australia Policy with - as one of its specific aims - the idea that if Asian labour came in wages and standards of living would be lowered. When Miss Eagle married in 1963 and purchased her bedroom suite it had stamped on it 'Made with European Labour'. Australians have resiled from that attitude and our country has welcomed people from all continents.
Miss Eagle also believes in moral causation or karma. We reap the consequences of our actions. Perhaps the advent of guest workers could be seen in this context. We used racism to protect our wages and standards of living now our racism is being challenged along with our wages and standards of living on our own soil by the very people we tried for 150 years to keep out.
But this is beyond karma. There is justice and equity for no one in the guest worker program.
Will Australians wake up to this and tell government and business to desist?
Posted by Unknown at 7:09 am

How long is a piece of string? 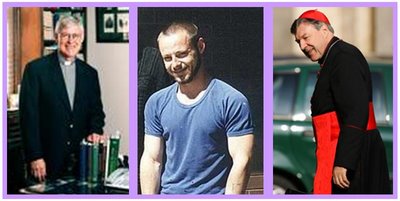 Whatever David Hicks has or has not done, the Australian community is tired of the attitude of the US and Australian governments on this matter.

The latest people to speak out on the matter are the Anglican and Catholic archbishops of Sydney - arguably Australia's most senior churchmen. Miss Eagle agrees with Nicola Roxon of the ALP and Bob Brown of the Greens:

The Tree is dead

(a) the place has outstanding heritage value to the nation because of the place's importance in the course, or pattern, of Australia's cultural history - for its association with the Shearers' Strike of 1891 and as the starting point of political and social processes, which led to the eventual formation of the Australian Labor Party.

(b) the place has outstanding heritage value to the nation because of the place's strong or special association with a particular community or cultural group for social, cultural or spiritual reasons - for its association with the Trade Union Movement and Labour/May Day celebrations

Now a person or persons unknown has/have poisoned The Tree and it is dead.

The tree had struggled but was kept alive with a great deal of skill by specialist arborists and the determination of a number of local Barcaldine people led by long-time/life-time Australian Labor Party stalwart, Pat Ogden - the Licensed Victualler of the Globe Hotel. 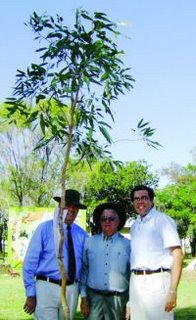 There is hope, though. In 2005, Labour Day in Barcaldine saw the planting of a strong and healthy offspring of the Tree of Knowledge. The 14-year-old offspring was raised from cuttings made by Queensland Department of Primary Industries and Fisheries scientists in 1990, and planted in Barcaldine on Labour Day.

Miss Eagle wishes to pay tribute to Pat Ogden and his stalwart committee members who for so long not only kept The Tree alive but also kept alive Barcaldine's place in Australian history. Miss Eagle had the privilege of flying the Labor flag at two elections back in the '80s in the Federal seat of Kennedy, of which Barcaldine is a significant party. She knows first hand of the work that has been done by Pat Ogden, the committee, and the community of Barcaldine.

She was there for the marvellous first re-enactment of the Shearers' Strike in the early '80s produced and directed by the late Gilbert Spottiswood. Then afterwards she recalls adjourning to the Globe Hotel. The front bar was overflowing and in the tiny dining room at the back a rowdy talent quest was conducted on a dining room chair with the audience awarding points in the manner of Shearers 3-Squatters 0.


Such a night had never been seen in Barcy and was only exceeded by the celebrations on the Labor Day weekend of 1991 to mark the birth of the Australian Labor Party underneath the Tree of Knowledge during the Shearers' Strike. Those celebrations were so mighty that the Globe was drunk dry.
Posted by Unknown at 6:51 pm

History was made to-night. 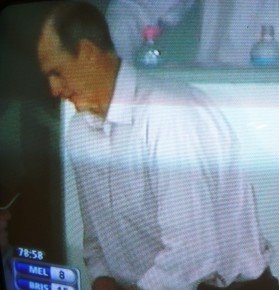 Wayne Bennett leaves the coach's box
to congratulate the Broncos.
History was made to-night.
Wayne Bennett is now, officially, the greatest NRL coach 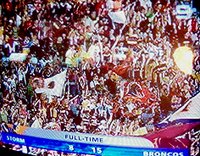 after the Broncos decisive 15-8 win in Sydney
against the Storm.

The Storm got in there: Blair, Geyer, Slater 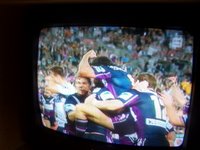 They tried and rejoiced

But it was not enough.

It was a great night for the Broncos 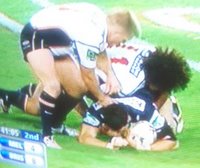 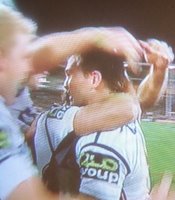 The Broncos rejoice in Victory 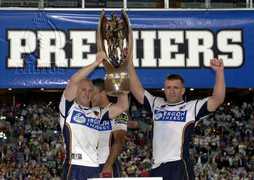 The Storm: their faces say it all 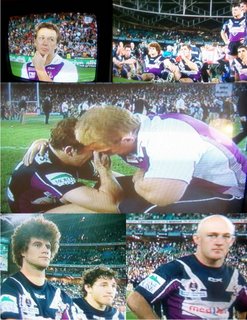 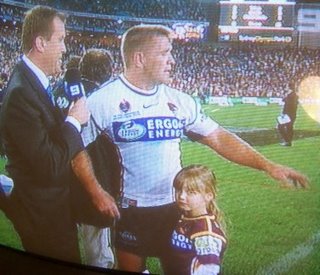 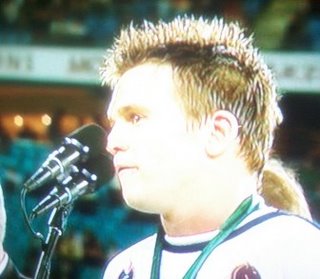 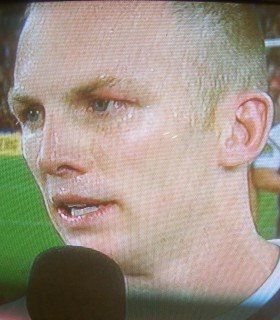 Broncos Captain Darren Lockyer sums it up for the media

The Battle of the Coaches 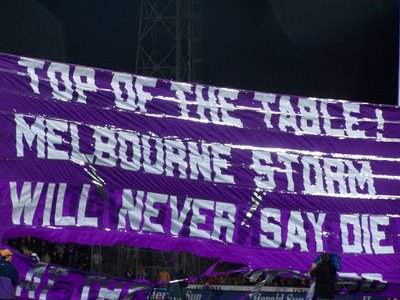 To-night is an historic event in Rugby League as the Broncos play the Storm at Olympic Park in Sydney.

This is at the heart of the dilemma in Miss Eagle's Household. Our Queensland origins mean that Wayne sits high in our hearts. We love and respect him as we do few individuals. Miss Eagle and Herself think he is a wonderful role model in life. Miss Eagle loves Mrs Lockyer's boy Dazza and to-night is the farewell - win, lose or draw - of that wonderful stalwart, the grand old man of the Broncos, Shane Webcke. How wonderful it would be to send Shane out on a grand final high after years of sterling service. Miss Eagle always pictures Webcke as a man of broad shoulders backing up the team and keeping it upstanding in the face of tremendous assaults.

Then there is the Storm. This team gets Miss Eagle and Herself where they live - in Melbourne. Craig Bellamy coaches the Storm. A win by the storm to-night will set Craig on the path to super-coachdom. He has worked miracles at the Storm. This year the Storm have topped the ladder at 44, losing only 4 games. They are Minor Premiers. The also swept all before them at the NRL's Dally M Awards with Craig named Coach of the Year; Cameron Smith crowned Player of the Year; and everyone's favourite Cooper Kronk named Five-eighth of the Year.

Now if all this is not enough to trouble Melbournians who love Broncos, then there is the fact that the Storm is riddled with Queenslanders: Billy Slater (be still Miss Eagle's beating heart), Cameron Smith, Antonio Kaufusi, Dallas Johnson, Cooper Cronk, Nathan Friend, Michael Crocker, Jake Webster (the only Melbourne born player) spent his formative years in Queensland, Sam Tagataese (began his Australian career in Queensland), Jeremy Smith, Dennis Scott, Smith Samau, Greg Inglis, and Scott Anderson. Out the thirty young men in the 2006 Squad, 14 are from Queensland. Is it any wonder that a Broncos v Storm game causes tremors in this household.

Herself is in denial. She doesn't want to know. Everything stopped last weekend for her and both the Broncos and the Storm are winners. Miss Eagle will watch every second of the match on television to-night - barracking for Mel-bun; Mel-bun; Mel-bun but carrying Brisbane in her heart every inch of the way.
Posted by Unknown at 5:17 pm