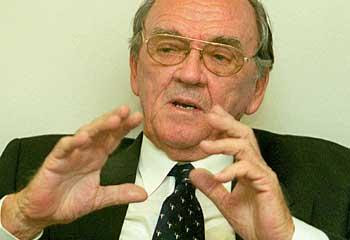 A great and unique political figure of Australia will walk no more with us. Miss Eagle speaks of Tom Burns: formerly State Secretary of the ALP in Queensland, Federal President of the ALP, Queensland Opposition Leader, Queensland Deputy Premier, and devoted husband, father, and fisherman.
To read more about Tom's achievements, read here. Miss Eagle will talk about some things that won't be in the official obituaries.
Miss Eagle first met Tom back in 1970 when he was State Secretary of the ALP. These were the tough times of the Bjelke-Petersen dictatorship in Queensland and Labor looked like a non-event, an irrelevancy in Queensland and on the national stage. In those days, Tom did not have the sartorial elegance he was later to effect. Miss E would call the style more racecourse spiv - checks, hat and all. You had to tune in to listen to Tom. He spoke rapidly and not necessarily clearly.
Tom entered the State Assembly and became Leader of the Opposition. Along the way Tom married Angela. Things changed. Miss E's guess is that Angela grounded Tom and gave him a more relaxed outlook on life. The clothing style improved a thousand per cent. Miss E has never forgotten bumping into Tom one Saturday morning as he caught a quick breakfast in Toowoomba. He was wearing a trendy three piece denim suit - and no hat. What an improvement!
Then there was his speech. It slowed. It was easier to understand and to listen to. This was thanks to Brisbane and Queensland's greatest communicator, Russ Walkington of Radio 4BH. (Allow Miss E to have a little boast here - back in 1971 Miss E defeated Russ Walkington in a public speaking competition. This thrilled Miss E - but she knew and knows who the better speaker was.)
Miss E believes Tom to be unique because of what she perceives to be an unusual gift among politicians. Tom could take a complex issue and reduce it to such simple and succinct language that the person in the street without great education could comprehend. Tom, unlike many politicians, did not bamboozle people. This great gift of communication and the fact that he was fair dinkum is what has made Tom Burns so well beloved.
Finally, who can forget the night of December 2, 1989 when Labor defeated the long reign of the corrupt National Party in Queensland. Tom was the cheshire cat that night. Winners were definitely grinners - inspite of Goss telling everyone to take a cold shower!
Tom lived at Wynnum - where Miss E embarked on life - close to The Esplanade and his beloved Moreton Bay. Because Tom loved his fishing - wherever he was in Queensland. And he died on Moreton Bay. There will be a State Funeral next week for Tom. Don't know if he will be cremated - but perhaps, if he is, Moreton Bay is where the ashes will be scattered?
Vale, Tom. You have been a great contributor. Miss E hopes the fish are biting where you are travelling. Best thoughts, best wishes to Angela and the girls at this time.
Posted by Unknown at 7:19 am