A crack appears in the rotten facade 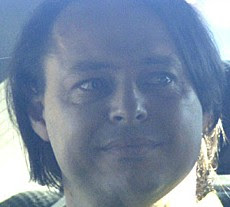 This blog has supported justice for David Hicks for a long time. He was incarcerated in Guantanamo Bay for a long and inhuman time. Now comes this news:

Hicks' lawyer, David McLeod, has told The Age he is confident that sooner or later either the US Supreme Court or the American political process will find the military commission system that convicted Hicks either unlawful or unsustainable.

"If the Supreme Court gets rid of the commissions, his conviction will go with it, and so will the proceeds-of-crime constraints," Mr McLeod said. It is also possible Hicks would then be in a position to seek compensation.

Go here to read further about the politically trumped up case that even the Chief Prosecutor of the US Military Commissions admits to.
~~~
When you can do nothing else: bear witness.
Posted by Unknown at 7:17 am 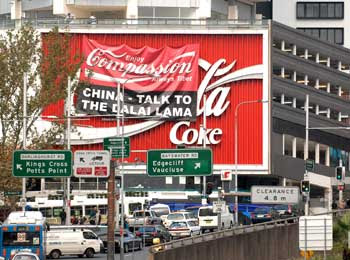 Picture by Ross Schultz from Perth Now
As I begin this post, I am watching Matilda on Sky News giving the Aboriginal Welcome to Country in Canberra, ACT, for the Olympic Torch Relay.

But the cleverest protest of the international relay will probably go to the banner-hanging at King's Cross yesterday. The Coca-Cola sign at the top of William Street in King's Cross, Sydney is a long-standing highly visible icon. Thousands upon thousands of people drive past each day to and from Sydney's eastern suburbs. Many of these people are major decision-makers and influence-shapers in Australian society. But how clever - using the Coca Cola font; the message is brief and sensible - asking for compassion, begging for dialogue; and, last but not least, it was a peaceful, albeit brief protest.

Reports are that four people have been arrested. I hope the powers-that-be treat them gently. To come down heavily on such a clever, harmless, and peaceful protest would only signal to people who feel the need to protest that they must rely on quick, ad hoc disruption. Instead, let's give the promulgators of this protest full marks for ingenuity and peacefulness.