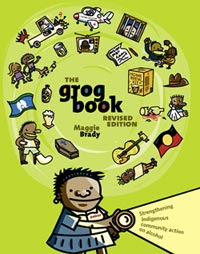 The Grog Book. Strengthening Indigenous Community Action on Alcohol. Revised Edition. Department of Health and Ageing, Canberra 2005. Available from http://www.alcohol.gov.au, or phone 1800 020 103 ext. 8654.
Miss Eagle has received the following comment with regard to the post on the Night Patrol at Tennant Creek:

I've driven through, and stopped overnight in, Tennant Creek in each of the last two years but wasn't aware of the night patrol. I did note that some types of alcohol, eg fortified wine, are not on sale. This seems to be a half hearted way of approaching the problem, though it's better than nothing.

Believe Miss Eagle when she says there was nothing half-hearted in Tennant Creek's approach to the liquor problem.

Miss E can understand someone calling the respoonse half-hearted but, from her viewpoint, the only whole hearted response would be to ban liquor for blackfellas and whitefellas alike. But this would cause an uproar among the whitefellas (as the Tennant Creek laws did - an effigy in someone's front yard) and lead to an even greater outbreak of grog smuggling by both blackfella and whitefella alike.

Two things: we live in a democracy and places like Tennant Creek have to live on a daily basis with Aboriginal people and their culture. Such a situation is unknown to the majority of Australians living on the urban fringes in a white dominated culture. Aboriginal culture is not some nice abstract thing which includes eating kangaroo and doing dot paintings. Living with Aboriginal people of significant numbers (half TC's population is black and approx. half of those are traditional Aboriginal people) means that their culture impacts on whitefella culture. The two cultures have to acknowledge each other and live together on a daily basis.

One of the factors which should be acknowledged with drinking in the Aboriginal culture is that the right to drink is tied up in a very real and historic way with Aboriginal civil rights -predominantly because of the experience of Albert Namatjira.

So in Tennant Creek not only whitefellas were unimpressed with the new liquor laws. A number of Aboriginal drinkers were unimpressed as well. One Aboriginal man said to Miss Eagle that, each pay day, he gave his pay to his wife and kept out his drinking money. Why should he not be able to drink as he pleased? All Miss Eagle could say was to get together the people who thought like he did and have their say. This voice, as far as Miss E could tell, was never heard.

The publicans of Tennant Creek fought the introduction of the new liquor laws through the court in a quite protracted case. They lost. Always remember vested whitefella interest and the way it markets its product. Never forget - as whitefellas do when comdemning blackfellas for drinking - the whitefellas who will do anything to get grog to blackfellas for profit.

Miss Eagle remembers years ago the publican in Burketown in the Gulf country who was such a thoughtful person that he sold a very, very rough red to the blackfellas in plastic flagons so that they would not cut themselves. Then there was the shop in Mount Isa just around the corner from the Mount Isa High School which met customer demand in a thoughtful way as well by selling methylated spirits ready mixed with Orchy (orange juice) which could be purchased chilled straight from the refrigerator and then taken the 50 meters or so across to the bed of the Leichhardt River to drink with friends while doing a spot of gambling. Mental note: Must talk about gambling which is an even worse problem than grog and no one ever mentions it or does anything about it.

With the mention of methylated spirits, Miss Eagle must refer to the campaign conducted for many years by Tony McGrady, former Mayor of Mount Isa and Speaker of the Queensland Parliament, to have methylated spirits made unpalatable for drinking. He did succeed - eventually. Let's ask ourselves why such a simple matter took so long? How many blackfellas' brains turned to jelly while whitefellas looked the other way and could not make a simple administrative decision in a matter which did not affect their well-being or profit?

The laws that were introduced in Tennant Creek were not iron clad. How could they be? But thanks to the nous and organisation of Julalikari Council, Tennant Creek - black and white - went on a journey which no mainstream community had been on before in this nation and no one has had the guts to follow since.

Now, contrary to public opinion, the drinking blackfella has always known how to get the most alcoholic bang for his buck. That's why the popular purchase was always a five litre cask of moselle. The sale of this was banned. But, of course, there were substitutes - Fruity Lexia, port and sherry.
Another problem developed with the consumption of port and sherry: the littering of streets with broken glass. Hardly a street corner was exempt. The problem had never been quite so evident with the casks. So the Tennant Creek Town Council applied for and received funding from the Northern Territory Government to pay for a ute and two men to keep the streets clean. The Northern Territory has a wine cask levy which makes such things possible. However - and isn't there always a 'however' - TC's wily General Manager of the time used to divert the two men and the ute to other tasks so that the original purpose of the funding was frequently unfulfilled.

Get the message! We complain about blackfellas - from ATSIC to drunks on the street - but where do they learn their lessons, what examples are set for ethical behaviour in the white community?
But back to half-heartedness. There was great co-operation to make the new laws work. Antipathy to the laws - with the exception of the publicans - in a public way soon subsided. The NT Liquor Commission and the Police were on side. Pubs which did the wrong thing were shut down - albeit temporarily. The Shaft at the Tennant Creek Hotel (otherwise known as The Swan) was caught by the Liquor Commission serving grog to drunken blackfellas. The owners were taken to Court and were forced to close all their outlets for three days - including their popular Steakhouse restaurant. The Goldfields was closed on a couple of occasions because of the raucous behaviour of drunken blackfellas.

Word to Miss Eagle is that the laws have fallen into disrepair because they were constructed around Thursday as the uniform Social Security benefit pay day. The government began to stagger paydays for different benefits and Thursday - the one day when public bars and bottleshops were closed - no longer has the same significance.

Now there is one little thing the Howard Government could do, without uproar, by administrative fiat - go back to a uniform pay day and get the NT to close public bars across the NT every Thursday.
Posted by Unknown at 5:57 am