Poverty - and the hospitable heart 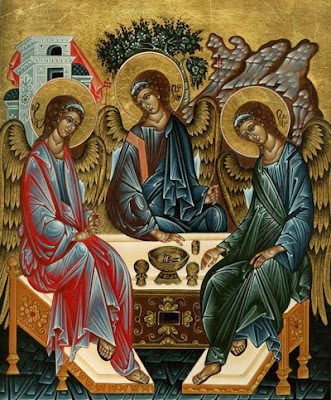 Rublev Trinity Icon - Abraham entertains
This post is part of a synchro-blogging effort on Poverty - as seen from God's perspective being hosted at Phil Wyman's Square No More. Miss Eagle has not participated before but has been invited by Steve Hayes from Notes from Underground to participate. To make things clear for those who don't know Miss Eagle and haven't figured things out by looking at the sidebar, Miss Eagle has dual citizenship. She is a member of two faith communities: The Religious Society of Friends (Quakers) and the Anglican Church of Australia. With regard to the former she is a member of Eastern Suburbs Local Meeting as well as the Dandenong Ranges Worshipping Group within Victoria Regional Meeting. With regard to the latter she worships at the Church of St Thomas at Upper Ferntree Gully in the outer south-eastern suburbs of Melbourne.

I apologise if I am perceived to be not exactly on topic in this post - but there are things on my mind.

Firstly, at St Thom's I do a two hour stint once a week in the Open Door Ministry. The Open Church Ministry keeps the doors of St Thom's open between 10am and 2pm Monday to Friday irrespective of whether there is anything else happening at the church. This means that the church is open for prayer. In winter, the back pew is made particularly comfortable with cushions, blanket, and heater. If someone wants coffee and a chat, the volunteers are happy to oblige. If emergency assistance is needed, we can help with emergency food parcels and with referrals to agencies who can be of more assistance.

A couple of weeks ago our team had a meeting which I found heavy going when it came to discussion on handing out our $25 vouchers to our next door supermarket. Now these were never handed out willy-nilly - in fact we only handed out 34 this year - but there was a lot of discussion which I found unedifying and we have now switched to only making food parcels available.

Miss Eagle is not one to take things lying down when she believes that things aren't right - as in the case of the attitudes surrounding the food vouchers. She did insert one or two comments into the discussion but they didn't cut the mustard with the attitudes expressed that day. So, believing in the old adage that one can lead horses to water but can't make them drink, I was not going to proceed to hitting my fellow parishioners over the head with scripture and theology. I have been around community and social services - including well meaning church programs - long enough to know that some people get it and some people don't. So anything further I could say would not be understood and would fall on deaf ears.

But as well as not taking things lying down, I am a devious soul. I am prepared to take back routes, come at things from various angles, walk beside folks over long distances to get to the desired result. Why am I prepared to do this? Because you see, I believe in the basic idea of the Open Church. There is something so very sad and so very wrong about churches that are locked up all day every day.

The Nazis closed churches in Germany. The rogue Anglican Archbishop of Harare closes churches in Zimbabwe. And in comfortable suburban Australia we Christians of various denominations close them quite willingly for ourselves.

So when we lock our churches what are we thinking, saying, doing? Are we demonstrating that we have such poverty of spirit that the locked doors of our churches say something about the locked state of our hearts?

Over at this church in Manhattan they seem to think it has something to do with the institutional church's love of money. Catholics in Australia have such a shortage of clergy (and I won't discuss why but you all know) that parish churches are under threat and lay people are taking things into their own hands to keep the doors open - and find themselves drawing closer to one another as a result.

Hospitality is a strong tradition in the Judaeo-Christian context. As the icon on this post portrays, the Tanakh contains stories of ancient middle-eastern hospitality in Genesis 18 and 19. The prophet Isaiah gives us the words of Yahweh in describing what God thinks is an acceptable fast:

Is it not to share your bread with the hungry,

and bring the homeless poor into your house;

when you see the naked, to cover him,

and not to hide yourself from your own flesh?

So what I wish to emphasise both here and within my communities of faith is that hospitality is an encompassing thing. In our Christian walk, it is required that we have a hospitality of heart and hand, spirit and mind. The Good Samaritan may not have been able to take the mugging victim into his own home - but he displayed a true spirit of hospitality and we have never forgotten it.

We have long-standing traditions of true hospitality within the Christian tradition which we can emulate. There is no shortage. However, one cannot fail to do honour to the mighty Benedict and his Rule. Monastic hospitality did not begin with Benedict but Benedict's wide and continuing influence through the Rule is a guiding star to us.

Chapter 53 of the Rule says:

All guests who present themselves are to be welcomed as Christ, for he himself will say: I was a stranger and you welcomed me. (Matt 25:35).

I believe our Open Church Ministry team is always welcoming. Where I think we can lift our game (please note I include myself in this ) is to see Christ in everyone who comes in that door. I think our discussion at our meeting indicated that we were not seeing Christ - because if it had been Christ, if we were sure it was Christ, perhaps we would have given him a multiplicity of food vouchers in breach of the boundaries and rules we have. We probably would have had him home for dinner. We would have sent out for cream cakes to have with the coffee instead of the biscuits.

Benedict's rule makes clear that how we respond in our hospitality requires a renunciation, a discipline, a reformation in ourselves. In Luke Bretherton's book, Hospitality as Holiness, he points out that:

For Benedict, hospitality of vulnerable strangers was directly linked to a readiness to change one's self-willed and pride-filled pattern of life in order that worship of God and love of one's neighbour, might come first.

Mother Teresa said in her book, In My Own Words:

We should not serve the poor like they were Jesus.

We should serve the poor because they are Jesus.

Perhaps, difficult as helping the undeserving poor may be, this is how we entertain angels unaware.

Below is the list of contributors to this month's SynchroBlog. The subject is poverty and the people contributing so far are:

Cobus van Wyngaard: Luke: The Gospel for the Rich

Dan Stone at The Tense Before

Jeremiah: Blessed are the poor... churches...