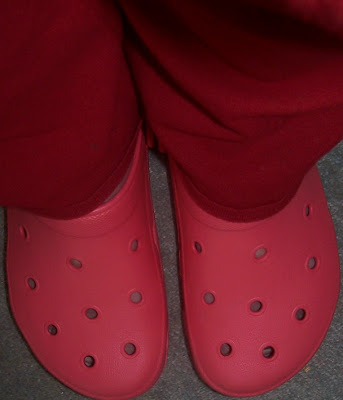 Oh, the paths one's feet take!
I started blogging over three years ago with The Eagle's Nest. My views are quirky, diverse, and often political. It seemed to me that I should separate my taste for the lovely things from my penchant for the controversial and so the beautiful things got discussed on The Trad Pad. Controversy was kept for The Eagle's Nest. Two other blogs came along: Oz Tucker which began with putting the handwritten recipes and clippings into some sort of order and Desert to have somewhere to put the spiritual resources which undergird desert spirituality.
Blogging has taken a back seat - except for Desert and, occasionally, Oz Tucker and, even more occasionally, The Eagle's Nest. I do want to have somewhere to discuss doings and talk turkey so I will no longer update The Eagle's Nest nor The Trad Pad. It will all happen here at in her own write. Hopefully, this will simplify things - and, perhaps, it may mean a different voice, a different viewpoint.
Which brings me back to the paths of one's feet. Four months ago a meeting was held in Melbourne with the purpose of establishing a multi-faith environmental organisation. I have never actually joined an environmental organisation before - but when I heard about this I was moved to action. You see, while I don't deny the science of climate change and I don't wish to ignore technology in finding solutions to problems, I am tired of the never-ending rationalism involved in the science, technology, economics and politics relating to climate change and environmental matters. My view is that human communities and the Creator of the planet need to be more clearly acknowledged in the debate.
From that very first meeting in July, GreenFaith Australia has been established and I have finished up its Secretary. In the four months since all this began, our landlords told us that they needed to come back and live in The Trad Pad at Upper Gully and then, in the midst of the house-hunting, I was ill for five weeks including two trips to hospital. Then, when the house was found there was the shifting - to a different suburb altogether. So, I am sure you will agree, there is little wonder that blogging took a back seat.
At this time, GreenFaith Australia has been launched - with a series of three seminars under the heading of Water for Life and 2009 looks like being an activity-filled year. We are settling into Home Beautiful and the house is getting into order. And there are new paths to discover and explore....

~~~
When you can do nothing else: bear witness.
Posted by Unknown at 10:42 pm Links to this post