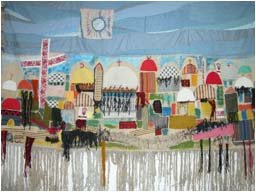 Picture from the website of Sabeel
Following this report, I hope the next thing we hear is that Kevin Rudd will attend a fundraiser for Christian Palestinians - if there are any left in Palestine as their mass exodus continues due to Israel and Hamas et al trying their best to exterminate one another.
In the West, it seems we are either apathetic and ignorant with regard to our Christian brothers and sisters in Israel and Palestine, some of whom trace their Christian origins in a direct line back to the time of Christ, or we are so carried away by Israeli and Jewish propaganda and the Christian Zionist line, predominantly from the United States, that we just go with the flow.
To know more about Palestinian Christians on the West Bank and in Israel, please go here.
Sabeel, the Ecumenical Liberation Theology Center in Jerusalem, is in the processing of establishing Waves of Prayer. The idea is that each Thursday people will pray at 12 noon in their own time zone with Sabeel for peace and justice in Israel and Palestine. Sabeel intends that Waves of Prayer will begin first in Australia's time zone.
Kevin Rudd mentioned in his speech that the estabishment of the state of Israel in 1948 was "Australian Labor government handiwork". This refers to the fact that H.V. Evatt, Australia's Foreign Minister at the time and later Leader of the Australian Labor Party, cast the first vote for the establishment of the state of Israel in the United Nations General Assembly.
Meanwhile, Christian Palestinians suffer. Christian Palestinians have their lands and livelihoods stolen. Their lives are taken in the violence and they are discrimated against by the Israelis both personally and systematically.
So, Kevin, how about it? In fact, as you and Therese are Anglicans, why not give public support to the Waves of Prayer and, while you're at it, please give Anglicord a ring. Contact details here.
When you can do nothing else: bear witness.
Posted by Unknown at 10:06 am