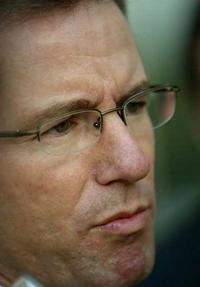 Family First Senator Steve Fielding has had his Mount Waverley office vandalised within 24 hours of casting the decisive vote in favour of voluntary student unionism at Australia's universities. While not condoning illegal entry and vandalism, I would suggest that the people who carried out the vandalism consider that, on Friday 9 December 2005, Steve Fielding became complicit in an act of vandalism against universities. Astonishing is his reported comment that he could not see a contradiction in a Family First senator supporting likely cuts for child-care services on university campuses. "Everyone else in the community needs to get access to child care and they need to pay for it," he said. Well, Senator Fielding, students paying their students' union fees are paying for their child-care. They are paying for a wide range of campus services which support their daily lives as students. It is amazing that people who received a free university education albeit paying students' union fees find it an overwhelming imperative that others now pay and acccumulate vast indebtedness - some students and their families are cast into a poverty from which it will be difficult to emerge - for a tertiary education.

Anyway, Steve it seems you are no different from other minor party and independent senators who seek to deal themselves into the political game; who seek to have themselves seen to be relevant. We thank you for your vote against the Howard Gang's IR legislation. We are just stunned that you lost your courage on VSU. You obviously could not cut yourself off from the government. You want to deal - but you haven't the guts to count the cost. Just remember Steve how many people are being alienated by toxic Howard and his gang of vandals. It could be that, in 2006 and 2007, there will a critical mass from varied constituencies. You will then have to deal with the long memories of the ALP and the Greens.
Posted by Unknown at 8:21 am