The apology - an end and a beginning? 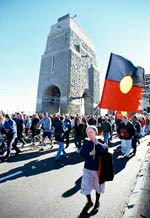 In 1770, my ancestor, the Amercian John Gore, was on the Endeavour with Capt James Cook RN when the continent now known as Australia was claimed by Cook for the United Kingdom. Approximately sixty years later, his son - also John Gore - settled on a land grant at Lake Bathurst near Goulburn in New South Wales. A land grant? Where did the land come from. Undoubtedly usurped, stolen from the first peoples of this land.

Black and white relationships in Australia have not been good. European settlers have massacred black Australians, have taken their land and their children away, have nitpicked their ancestry, have kept them from full participation in the life, economy and governance of this nation. The Bringing Them Home report has been a significant milestone in black white relationships from which Australians have not been able to retreat. Since that report there has been a call for a national apology.

John Howard, Prime Minister of Australia from 1997-2007, had great difficulty with the concept of a national apology. He could not use the word 'sorry' and merely expressed regret. This failure on Howard's part remained like a festering wound. Now, the new Australian government under the leadership of Kevin Rudd has made it the first item of business at the first session of Parliament next Wednesday, 13 February 2008.

We do not yet know the wording of the apology but there have been ongoing negotiations with Aboriginal leadership. The Opposition Liberal and National Parties have been their usual selves - with many supporting the apology and many against. It seems likely, however, that next Wednesday the apology will receive bi-partisan support although the Opposition complains that it still has not seen the proposed wording. The Opposition is now down to arguing whether the phrase "Stolen Generations" should be used in spite of this fact becoming synonymous with the removal of Aboriginal children.

My dear friend, Patricia Corowa, has written to the Prime Minister about the apology. Patricia lives in Sydney but grew up, as did Miss Eagle, in Bowen in North Queensland where she is much respected. Patricia has a long history of Aboriginal advocacy behind her. As a very young woman she took an active and visible role in the events leading up to the 1967 Referendum. She has travelled internationally as a representative of Aboriginal people advocating on their behalf. She has been an adviser to two ALP Federal Ministers for Aboriginal Affairs. Patricia will be in Canberra on Wednesday. Here is Patricia's letter:

I understand that you and your government are preparing the draft for an apology... and are finding it difficult... and I can appreciate your difficulty... because of all the significant issues that the government of the day was faced with... when it introduced and rigidly and cruelly acted upon its policy of protection... and which is the heritage for ensueing governments... right up to the government which you head... today... so that descendants of the First Tribes, People Tongues and the Ancient Nations of the Land... could be removed from mothers, fathers, families, clans, skin groups, tribes and ancient nations of the land... in the name of the crown...

All you need to do... I suggest... is to refer to the Commonwealth Parliamentary Papers Numbers 19, 20, and 21... about 1919-1920... and particularly to the Report of Cook & Bleakley... upon whose recommendations... the government's policy of protection was introduced... and the birthing and removal of half caste children from the Northern Territory... a protectorate... not a state of the federation... insiduously began... not as some have mistakenly believed... so that white women... would not be shamed... when they drove around the district... or even in their own homes... saw the physical characteristics of their own husbands, fathers, brothers, grandfathers, uncles, counsins and male friends... on the persons of half caste children all around them... but to provide a labour force... in the name of the crown... for the recently named Australia... which also in the name of the crown... was now superimposed... but has never obliberated... not even because of the overthrowing of the dicta of terra nullius... all of the up to 900 ancient first nations of this land... my own being Djirudala...

So Prime Minister... I can see your government's difficulties... but for a sincere and profound apology to be given... by Australia... to the peoples of the ancient first nations of this land... and for generational wrongs to be made rights... the sovereignty of the first nations of the land have to be recognised... treaties to bring peace have to be negotiated and enacted... between all of those ancient first nations... and the crown... and reparations be made... so that basic human rights... including release of all Aboriginal prisoners held in gaols around the land... in the name of the crown... that we go back to our own country... on allodial land rights... and take care of it... where we can again have healthy, nutritious food and traditional medicine... safe, secure shelter... love, comfort and sharing of family... on our own country... the heritage of our ancestors... in a culture... as you have recognised... to be the oldest... still practised... on the planet...

You have the resources Prime Minister... as have every PM and government of Australia... before you... so it should be easy... for you to frame your apology... to acknowledge where the removal of half caste... then all Aboriginal children... had its genesis... eventually in every state and territory of the federation... and be prepared... for the next steps... in the ongoing process... for the future of us all... for as Australian laws stand now... we are all... whether of the ancient first nations of the land... or boat peoples since 1770... under the crown... corporation sole...

I trust that you will take into consideration... all that I have written to you... and I await to see... whether any of it is contained in your apology... particularly the report of Cook & Bleakley...

Meanwhile, over at Crikey, they are asking people to come up with an appropriate form of words for the apology. Miss Eagle has contributed and here it is:

Saying sorry is not just about an apology but a new beginning. When the first Europeans settled here, they did not recognise - as we have difficulty recognising for ourselves to-day - the depth and extent of their ignorance of this land and its people.

~~~
Patricia, I don't know if this says what you would want it to say. I don't know what the negotiation position of Aboriginal leadership might be. I have tried to speak from my heart. I have tried to speak succinctly - which can be difficult for me! I also think short might be better - because then every Aboriginal organisation might be able to frame it and hang it on the wall (that is if what is said is of value to them).
I am no Don Watson. I don't know who is the wordsmith for the apology. I do hope, however, that attention is being given to the words so that they become as memorable as some of Watson's speeches for Paul Keating - the Redfern Speech, and the eulogy given at the tomb of the unknown soldier. This apology should be so simple, so beautifully drafted, and so worthy of landmark status that it can be learned and recited by children in school.
Next Wednesday is an opportunity - not just for an apology to and for the Stolen Generations. It is an opportunity to put things right in a symbolic and meaningful way. It should put to bed the recent History Wars and accusations of a black armband view of history.
But it should go further than that.
If it could ever happen, it would be good to be able to draw a line in the sand for all that has gone before 10am on Wednesday 13 February 2008. It would be good for every one of us to say we have learned a lot about ourselves since 1788. We face that self-knowledge with great humility and responsibility. We have much yet to learn but we want to learn moving forward together. We don't ever want to repeat the mistakes and ignorance of the past. Above all, the children of our nation -whoever they are - should never be held to ransom for our misdeeds. Our life on this continent won't be happy-ever-afters but we can realise we are all part of one nation - its joys and its tribulations - and we can communicate with each other in care, equity and respect.
Posted by Unknown at 7:38 am