Up to the job? Miss Eagle thinks so 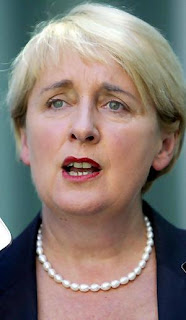 Photo: Sydney Morning Herald
Denis has posted a comment on the previous post in which he expresses his views on Jenny Macklin. Miss Eagle has commented there but gives the comment wider currency here:

Don't agree with you on Macklin.
In recent years in opposition, true, there was nothing much to be impressed about. But there was a time some years ago when Jenny had the scalps of Liberal ministers hanging from her belt. I think we are seeing Jenny Macklin coming into her own.

A lot of the ground work leading up to this week's Sorry was done by Jenny and her department - and it was thorough. I suspect she and others working with her put in the hard yards of discussion - and discussion in blackfella terms doesn't mean formulating a motion and asking for a show of hands.

In blackfella decision-making everyone, every last interested person, has to be spoken to and their views sought. Now I'm not saying that Jenny spoke to every living member of the Stolen Generations but there were numerous organisations and influentials involved in all this and they all had to be spoken to.

There have been other ministerial responsibilities to keep on top of as well. And a boss whose style is highly involved managerialism to satisfy. And then there was the history of the occasion to satisfy - everything had to be right. Wednesday would be no dress rehearsal. It had to be got right in terms of policy, semiotics and impact - and, if you are cynical, sheer politics. I think Jenny should have a little sign hanging around her neck saying "Watch this space". After all, she will not want to be adversely compared with Julia and nor will Julia want it vice-versa.
Posted by Unknown at 7:25 am