A community assembles at Ringwood for justice 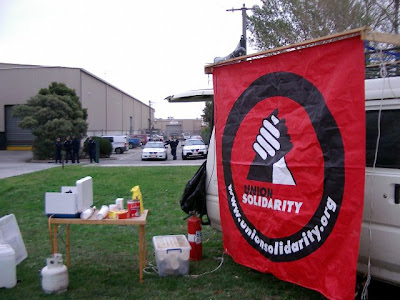 When you can do nothing else:
bear witness.
~~~
Employee relations under the Howard Government were a low point in employer-employee relations in Australia. The election of the Rudd Government has not restored normal service - hence the ACTU has now embarked on Your Rights At Work Mark II.
Union Solidarity was established to provide community support for unions and union members who withdrew their labour from employers in an effort to gain better wages and conditions, to press for union involvement at the bargaining table, and generally to right those wrongs that can come into the workplace when employers consider only their rights and economic interests and no one else's.
You will find Union Solidarity community assemblies in support of unions and their members across Melbourne as and when the need arises. The caravan, the coffee pot, the barbie, the warm fire and a microphone and cardboard and textas to explain to passers-by what is going on. Union Solidarity is something of a free-form organisation. No membership fees, joining-up handshakes or anything like that. It relies on community support - and how often the community turns up!
On Monday next, 23 June,
Union Solidarity will assemble not at a workplace
but to rally outside the
Ringwood Magistrate's Court,
39 Ringwood Street, Ringwood
at 9.30am.
The prosecution at Ringwood Magistrate's Court that Union Solidarity is interested in is that against Anthony Elliott, of Elliot Engineering. Elliott is the defendant in a trial arising out of a community assembly in May 2007. Elliot faces a number of charges. The prosecution will argue that he drove a truck in a reckless manner through a picket line. A number of Union Solidarity supporters sustained injuries as a result of Elliot's alleged actions.
Union Solidarity expects to see that justice takes its course.
Posted by Unknown at 6:53 am