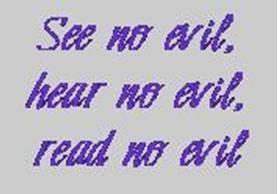 Are they born this way? Or is it a learned response? Y'know Governance 101 - Subtitle: See no evil, hear no evil, read no evil. Or is it just too much television: the Sergeant Schultz response - I know noth-ing. And it appears it is not just Alexander Downer, Australia's Minister for Foreign Affairs with responsibility for matters relating to the UN and the oil-for-food scandal, but all those bureaucrats in the Department of Foreign Affairs and Trade. Whichever way it becomes ingrained into political and bureaucratic personnel, we have seen the art form at work before - in the Children Overboard affair.

And the one time the Department queried anything, they asked AWB if they did it and they said no. What thorough-going investigators they are! Police don't take a suspect's word for it that they are innocent. Immigration officers don't take new arrivals' words that they are genuine refugees and asylum seekers. But the word is taken of a corporation whose personnel support the incumbent government when it denies breaching international law and indulges in breaches of Australian corporate law. What a difference a white collar and designer tie makes!

The next questions are - who reads and actions memos? How would they know if their houses were on fire?
Posted by Unknown at 3:01 pm