The Battle for the Senate 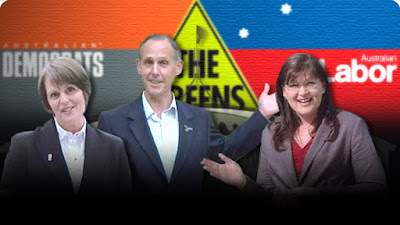 Get Up! is masterminding the fight to keep the Senate out of the hands of one party, in particular out of the hands of the party which has control of the House of Reps. There's little doubt that Australians prefer the Senate to be a true house of review complete with Committee System (thanks and tribute to Lionel Murphy). The body politic is smarter than the major political parties give it credit for: they are able to vote one way in the Reps and vary their vote intelligently in the Senate. Long may they do so!

Family First has been reported as indulging in some classic dummy-spitting about the projected preference deal The Greens have stitched up with Labor (with the exception of Labor in Gunn's Tasmania). "Outrageous" cries Senator Fielding who holds his Senate seat on a primary vote of one point not very much per cent!

Fielding is in the Senate because of a cute preference deal at the last election and he says he's ready to talk to Pauline Hanson on preferences. Will the FF preference cuties try to come up with a deal whereby they can get anything Hanson has on offer without giving anything back? Talk about long spoons and supping with the devil!

But if venality re Hanson's preference is not enough to put FF colours on full display, get this:

"It is absolutely outrageous to think that Kevin Rudd would want to preference the Greens, knowing their stance on drugs, free injecting rooms in streets, free heroin," Senator Fielding told ABC television.

Clearly, a vote for Family First means voting for Chicken Little and his policy platform of the sky falling in. Certainly, harm minimisation is something FF finds intolerable. And injecting rooms in the streets! Well, whoda thunk it? A building with rooms in streets! Where else do rooms go? In the air so that the sky can fall on them?

But seriously, dear Reader. When all is said and done, a primary vote for The Greens in the Senate makes good sense for one very good reason - Rudd's industrial relations policy.

The electorate has not responded negatively to Rudd's "me too" political campaign. This probably means two things:

To ensure that Rudd and Labor introduce an industrial relations program that is more accommodating to the wishes of the masses of Australians who have switched their votes to Labor on the strength of Howard's industrial relations legislation, the best bet is to vote The Greens 1,2,3 in the Senate.

The Greens industrial relations policy is more accommodating to those who have fought for the industrial rights of working people.

The best way to ensure Your Rights At Work is to have Labor in government and The Greens with the balance of power. In fact, The Greens are calling it "Third Party Insurance"!

Let Family First focus on the quality of mucus on their pacifier!