Angus McMillan and the voice of history 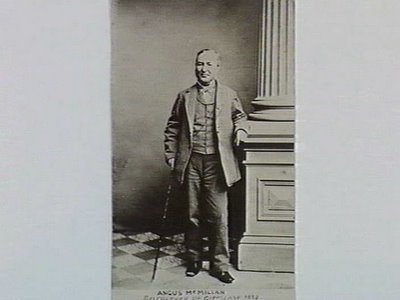 A recent journey through Gippsland recently brought Angus McMillan into my consciousness. McMillan has an entry in the Dictionary of Australian Biography. One thing we know now is that there are many aspects, many voices to history. What we learn at school, or what is written in dominant histories is not the whole story. There is an old saying about history written by the victors. Angus McMillan was certainly one of the victors. He is a pioneer of white settlement only in Gippsland. Notice I added the word only. Settlers tend to just say that so-and-so was a pioneer. We forget or gloss over that so-and-so was a pioneer in one sense only. I first heard about Angus McMillan and his journey from Adrian on The Director. I found this interesting since there were other Victorian journeys by whitefellas but only Angus McMillan's is talked about in Gippsland to any extent. This is probably because it had and economic impact that was not present with the other journeys. The first seems to have been in 1797 when the Sydney Cove was wrecked on Preservation Island, part of the the greatest survival trek in Australian history. I am also aware of Thomas Walker's journey publish anonymously as A Month in the Bush Of Australia. Journal of one of a Party of Gentlemen who recently travelled From Sydney To Port Phillip - with some remarks on the present state of the Farming Establishments and Society in the settled parts of the Argyle Country. Catchy title, don't you think? The reason I know about this one is that my four-times great-grandfather Rear-Admiral John Gore gets a mention. And of course, there was Hume and Hovell but they didn't go to Gippsland. These are the histories of the victors. But other voices are heard these days. One place to hear the other voice is at Krowathunkooloong, the Keeping Place in Bairnsdale. It was here I heard and read another side to the McMillan journeys: the deaths, even the massacres of aboriginal people that are ignored or glossed over. These were the deaths of people defending their land, their country. They are recorded and remembered there at Krowathunkooloong. There is an electoral district named for Angus McMillan but aboriginal people would like to see this name removed.In recent years, there has been much debate within the ranks of academic historians about the extent of aboriginal deaths during the taking of land by white settlers. This debate has earned the name The History Wars. While the debate rages and even finds its way into print, one thing tends to be overlooked. Firstly, that some massacres are fairly recent and are within living memory or only a generation behind. Secondly, that the stories of these massacres have been handed down within families to whom they are relevant - both white and black although in many white families they are covered up. I used to live in Mount Isa in North West Queensland. The Kalkadoons, the original people, had some huge, and sometimes successful, battles with white settlers. They were true warriors. In very recent times, along comes Charles Perkins who became quite a controversial figure in modern aboriginal history. One thing that seems never to be realised is that Charlie was a descendant of those Kalkadoon warriors - and he was a fighter too. I once worked with his sister, Nerida, and I sometimes used to give his mother a lift home from the shops to her home in Sunset. These are the things - the stuff of a family's heritage - that are lost in the academic research. So I have a family tree which includes a crew member of The Endeavour and his son, also a naval officer and god-son of Sir Joseph Banks who came as a white settler to a land grant (stolen land?) at Lake Bathurst near Goulburn. The Perkins family has a family tree which includes a fighter for aboriginal equality and rights, as well as fighters for their land and their freedom.So let the academics do their histories and argue and debate. But the stuff which gives flesh to the bones of an academic history lies in local and family histories and the energy and memory that sustains them.