This is a hate blog 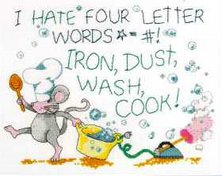 If it's on Tim Blair, does that make it official? I am cited in one of his posts headed Heed The Hate Blogs. So does this make me a hate blog? I have earned such an accolade from such a distinguished blogger (Ranked 7/10 on Google) for this. And here is the cartoon at the heart of all the angst. HT Tim, this little blog (Ranked 3/10 on Google) has never seen such traffic. It has come from across the world - including Israel - and the day's not half-way gone yet. And RebeccaH said

Eagle’s Child also says (among other moony, misty things) that “No is a very conservative word”. I suspect neither she nor Leunig ever heard that word much when they were growing up.

Moony, misty. Such compliments! Better than hard-nosed, bitch, and worse. And, as for the parental child-rearing.... Well, I was an only child for six years until my sister arrived. My mother says that she and my father did everything perfectly and strictly with me. Proof of this is that I am the only non-tea-drinker in my family. This is due to the fact that my sister, unlike me, was allowed to drink tea from our father's saucer and has not stopped drinking it since. When we were older and I didn't quite understand my sister's risque jokes, my mother remarked

It's not your fault, love, that you were brought up genteel.

My schooling was entrusted to the Sisters of Show No Mercy who, in my day, were predominantly Irish. Girls who wore make-up, particularly to Mass on Sunday, were regarded as fast and loose. Getting a handle on the age, RebeccaH? Definitely pre-Dr Spock. But I did get to meet him when he and I were anti-Vietnam war protesters. Guess this makes me tainted, do you think? Just that I prefer yea-sayers who see all the possibilities to nay-sayers who like to control and censor.