Business gets stuck into the budget 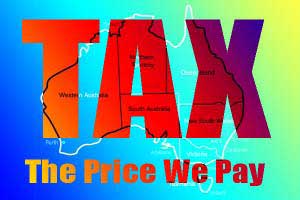 The Business Council of Australia and I are seldom singing from the same song sheet - but on one song we are in perfect harmony. That is the one about the renewal of Australia’s economic infrastructure such as roads, rail, energy and water to support future growth. In a time when trade barriers have fallen with greater and lesser success, the one thing we can do to support business - big and small - and ourselves as individuals and as a nation is by investing in national infrastructure. Australia has creaking infrastructure and, as well, has major illnesses to be remedied - such as salinity and associated problems in the Murray-Darling system. But what does our Government do? Hand out tax cuts to individuals willy-nilly as well as the profligate untargeted placement of money in the pockets of individuals prior to elections. Economic rationalists have weaned us - so they think - on to an effecient tax system uncluttered, unwarped by the sorts of tax deductions we used to be able to make for items such as mortgages, rates, and medical insurance. Now the government itself is corrupting the tax system by all sorts of churning of tax rates, tax rebates, family funding and so on. I am not against tax cuts or family support by government in principle. I am against untargeted spending. I am against willy nilly rebating individuals when collective investment in items such as national infrastructure and community-based services such as health, education, and policing would be of greater benefit. Our government clearly thinks that our greatest motivator is greed. It clearly thinks that if our taxes go into funding items of national and community importance we are so greedy we will not give them a priority above our own purses. So in the driest continent on earth we are turning over our water resources to the private sector as we bury ourselves in saline infested land that won't grow a thing. Our transport linkages are inefficient and, quite often poorly placed, and become part of the hidden costs that we all unnecessarily pay. If we fail to take the Howard Govt to task on these matters, then we prove that we agree with their assessment of us. Our personal greed dominates us. And the Howard Govt is happy to keep corrupting themselves and us by buying us and our votes - irrespective of anything else.