THE DAY OF ROOSTING CHOOKS FOR THE MAN OF SHAME 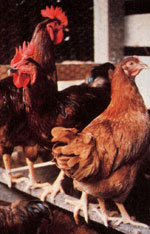 I am up bright and early as you can see, dear Reader. Booth tables in the station wagon, basket packed with everything from blu-tac to wire cutters and bottles of water. To-day, the final small anonymous actions of myself and thousands of people like me are orchestrated to rid Australia of a shameful and shameless leader.

It seems that Tracee Hutchinson has been eavesdropping. At least, that is what it looks like. Go here to see what I mean. She says it so much better than I but with exactly the same sentiment.

God go with you to-day, dear Reader. Vote for justice remembering all those sad cases of littered humanity strewn in the path of John Howard. Vote against his self-aggrandising meanness which benefited his kind and saw him - our national leader - deserting the Prime Minister's residence in Canberra for the desire of every Sydney-sider, a harbour view. Remove him from the national stage, dear Reader. Remove him from our embarrassment as he cavorted the world stage with George W Bush, and cavorted on television in a tipsy state with the fascist, Silvio Belursconi. And tell him to take his un-Australian values with him.
PS: Go Maxine in Bennelong to make Howard only the second PM to lose his seat.