THE WEEK OF ROOSTING CHOOKS: Friday 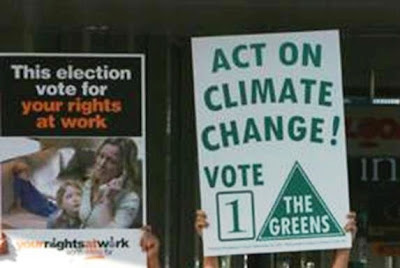 The last day of the campaign to-day in what - one way or another - is an historic election. Miss Eagle wound up her small and anonymous role in the campaign with two and a half hours of leafletting in Rowville. To-morrow will be an early start as Booth Captain at Upper Ferntree Gully School for Your Rights At Work and a late finish at Kent Park School, Ferntree Gully for The Greens.

John Howard's career in government is coming to an end with the same cloud hanging over it as it began: RACISM.

There have been countless decisions by the Howard Government which have displayed a meanness to humanity beyond belief. But let's recall the inherent racism of Howard.

The fact is that, under Howard, the Liberal Party is racist. Miss Eagle does not suggest that all Liberals or even Liberal Members of Parliament are racist. Miss Eagle believes that there is a dominant strand within the Liberal Party under Howard which means that racism is always bubbling away beneath the surface and influencing policies such as those on immigration, national security, citizenship, defence, foreign affairs and trade.

Howard and his team have long stood accused of dog-whistling. The term "dog-whistling" derives from the fact that dogs are able to hear high-pitched whistles and sounds that human beings cannot. Dog-whistling in its political context refers to being able to enunciate or signal views in a way that larges slices of the body politic don't detect the full meaning being enunciated or signalled but those who are on the right wavelength do.

So when Howard has slammed into "political correctness", the sub-text or dog-whistle message is that there are all those left-wing people out there who stop us saying what we want to say. What we want to say just happens to be slanderous, libellous, racist, discriminatory, hurtful, unkind and mean but we must have the political freedom to say it. All those politically correct lefties are wrong and are to be despised.

Similarly, Howard despises a black armband view of history. Woe betide the historians who have opened up Aboriginal history to scrutiny and outlined the massacres and other disasters that have befallen Aboriginal people since their contact with white settlers. This sort of activity is to be despised and those who challenge the black armband view are to be rewarded - even unto seats on the board of the ABC.

And now there is the written form of dog-whistling as practised in the seat of Lindsay whose retiring member of parliament, Jackie Kelly, has been such a great favourite of John Howard. Notice that Chijoff, whose husband was one of the ringleaders in this escapade, has not been nor will be dis-endorsed. Howard does not want a repeat of the Pauline Hanson episode, does he. Howard condemns it - and the rest of it is left with the NSW branch of the Liberal Party to deal with. Ethics are not high on the list of the Liberal Party in the seat of Lindsay - and, perhaps, in the NSW branch of the Liberal Party.

So Howard has finished as he had begun - a dog-whistling racist.