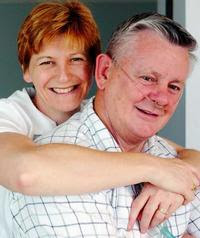 Bernie & Karen Banton
Sky TV will telecast Bernie Banton: A life at 8.30am this morning

Bernie Banton is dead. A man who embodied so many of the characteristics which Australians admire has gone from our midst. Bernie is a Parramatta working man, a fighter for justice and right. As I right, I find words difficult to describe to people who have not seen Bernie on the TV so often as Australians have.

Bernie fought James Hardy for those who were suffering the ravages in their bodies of their interlude with asbestos. The fight would have been bad enough and relentless enough - but James Hardy turned out to be a shameless corporate criminal. A formerly reputable Australian company, it shifted itself to Holland leaving what amounted to a token amount of money in a separate company for the afflicted in order to avoid its responsibilities.

But Bernie took on the Australian Tax Office too. The heartless ATO was prepared to allow taxation to eat up further the compensation money for the asbestos victims.

Bernie may yet have one more triumph, one more scalp on his belt. As the Liberal Party writhes in agony and uncertainty after its dreadful defeat on Saturday which Michael Kroger has dubbed the Liberals' lowest ebb since the foundation of the party 60 years ago, Tony Abbott - the Health Minister in the Howard Government - has thrown his hat in the ring for the Liberal Party leadership. It is unlikely, in Miss E's view, that the Libs will take Abbott on. In fact, Abbott's own view that he has a chance shows a marked lack of self-reflection. And what has Bernie to do with that? This, dear Reader.

Abbott is nothing if not rude. Don't send him on a peace mission. He'd only add fuel to the flames. He attacked Bernie in a most dreadful way. Bernie handled that with his usual dignity. Abbott was forced to apologise. Abbott showed his true character. Bernie showed his.

And how did Bernie keep going? How did he keep going in the media campaign, the battle for justice, the battle to fight a one in a million disease? In Bernie's own words, faith in God.

Rest in peace, Bernie. You have been a good and faithful servant. Our thoughts and prayers are with Karen and your family - including your sister who flew in from Texas, USA.

Eternal rest grant unto Bernie, O Lord, and may perpetual Light shine upon him. May his soul and the souls of all the faithful departed, through the mercy of God, rest in peace. Amen
Posted by Unknown at 6:33 am