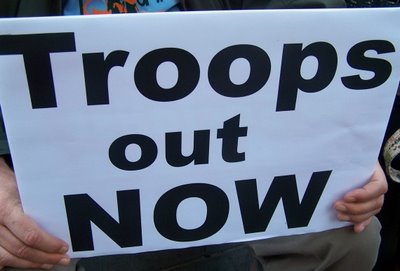 Bring Australian troops home now
Australians have been consistent in their opposition to the invasion of Iraq. Hundreds of thousands marched in the streets across Australia to express their opposition. Polls showed that Australians would only consider armed intervention in Iraq under UN supervision. When Australia eventually became part of the "Coalition of the Willing" and went to Iraq anyway, opposition in the polls diminished. This was more an admission of a fait accompli than wholehearted support of Australia's participation in the American hegemony and the Iraq War. Increasingly, Australians are expressing their opposition to the Iraq War in opinion polls and saying that they want Australian troops brought home.

There are times when the people have a mortgage on wisdom, not their government. Australians proved this in the matter of East Timor when, over 25 years in the face of Labor and Liberal Governments' support of the Indonesian takeover of East Timor, they expressed opposition to the Indonesian takeover of Timor Leste and provided decisive support, finally, for the Australian Government to take armed police/military action to halt the bloodshed caused by the Indonesian military and their bloodthirsty Timorese allies. Australians live in a democracy. Miss Eagle does not believe that Australians are prepared to sacrifice everything to the US-Australian relationship. Perhaps the opinion polls should be including questions based on that proposition.
Posted by Unknown at 9:50 pm