John Howard, Feminism and the burqa 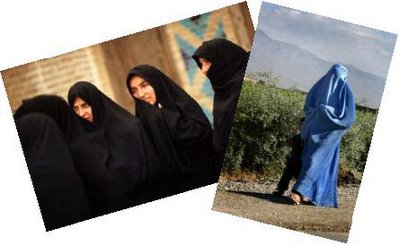 Why should I find it difficult? Because there is so much communication in the human face. We communicate not only with words and sounds but with our eyes and a variety of facial muscles: eyebrows, cheeks, lips. We understand not only with what we hear but what we see. And, quite often, we understand with intangibles which we can only intuit from information coming to us in ways which we cannot adequately and rationally explain.

I try to understand the religious strictures. Miss Eagle is a person of religious values and sentiment and grew up being taught by women in head to toe covering with only the face and hands evident. The rationale for that clothing was not too far removed from the rationale, as I understand it, of Muslim women. So I am not about to get uptight about the clothing of Muslim women. But I do find it difficult.

I always recall how I felt years ago when I lived in Mount Isa in north-west Queensland. In that hot desert climate, I often used to see a Muslim couple shopping at Woolworths. She was dressed in the hijab and clothes that were full-length, high necked and long-sleeved - clothing which western women find oppressive in extreme heat. Beside her was her husband dressed like so many North Australian men in stubbies (shorts), a tank top and a XXXX (a brand of beer) hat. The contrast, to an outsider, seemed oppressive: the man identifying with mainstream Aussie culture and dressing appropriately to the climate and the woman (by choice, I hope) in clothing considered oppressive in Australia, particularly when worn in temperatures of 40 + degrees celsius.

I am encouraged by Phyllis Chesler's article on feminism, women, Islam and Europe. Let's talk. And in all the talk remember that Muslim women need to understand our views and we, mainstream women of the Christian West, need to understand theirs.
Posted by Unknown at 11:34 pm