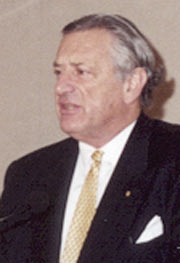 Justice Marcus Einfeld has a distinguished track record. He is one of Australia's most distinguished jurists and one of our most outstanding activists in the matter of human rights. Most recently he was part of the team who dealt - with great sagacity - with the Australian Government on the matter of Vivian Alvarez Solon and her compensation and her repatriation to Australia.

Last night, at the University of Western Sydney, he said

Apparently political transparency is a democratic ideal to which we only pay lip service these days.

He was speaking with particular reference to the support of terrorism by western democracies and with direct reference to the involvement of the Australian Government in the support of the regime of Saddam Hussain by AWB . However, political transparency is an issue for democratic governance in Australia whether it is at Federal level with a Liberal-National coalition or at State level where there is an ALP hegemony across the states. "Commercial-in-Confidence" has become a modern catch cry, a wall government puts up to hide its dealings from public view. This goes hand in hand where government has "de-regulated" and put many areas which once had direct government oversight into the hands of the private sector. This allows government to be at least one remove when accountability and transparency is sought and encourages a culture of deniability. And the Howard Government has become the master of deniability. The Tampa affair and the children overboard matter are areas where the Prime Minister was able to achieve a high level of deniability and was never brought to book by the Australian electorate.

...how far we can allow ourselves to be led away from fundamental liberal and democratic tenets in the name of the fight against terrorism. The anti-terrorism bill - in particular its anti-sedition laws - was, "a Pandora's box of possible abuses if used incorrectly". He added: "This is the hallmark of a society leaning towards an autocratic framework, one in which nationalism, homogeneity and a warped and misinformed concept of 'the other' are thrown together into a heady and volatile cocktail."