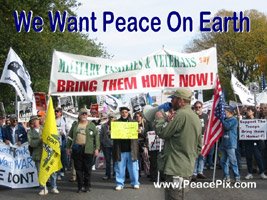 The U.S. has launched a major offensive in Iraq
- the biggest since the early days of the war in 2003.
This afternoon, Friday 17 March, 5.30 pm in Melbourne there will be a Troops out of Iraq Rally. The rally is part of an international weekend of protest to mark the 3rd anniversary of the invasion of Iraq.
The rally will be held at the State Library, cnr Swanston & Latrobe Sts, CBD. It is being organised by the Melbourne Stop the War Coalition. Information can be obtained by phoning 9639 8622 or emailing melbournestopthewar@yahoo.com.au
WE WANT PEACE ON EARTH
AND GOODWILL TO EVERYONE
Posted by Unknown at 6:52 am