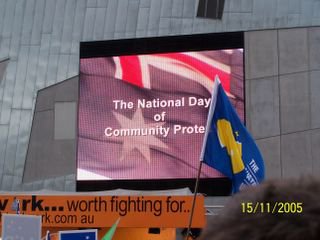 The National Day of Community Protest

I caught the 7.30 am train from Upper Gully this morning. The rally in Federation Square was advertised as commencing at 9am. Now I knew there would be people when I got there - to get there very early meant getting up far too early at the Upper Gully Trad Pad. I was flabbergasted to find, when I crossed Swanston St from Flinders Street Station,the rally-ers shoulder to shoulder already and Fed Square jam packed. I came in on the train with a group of AWU members in my carriage who exited Flinders Street Station through the Elizabeth Street exit because they were gathering to march. As photographs will show - St Kilda Road was packed across the bridge, crowds back up Swanston St to Collins Street, and I think they were up Flinders Street as well. During the rally we were asked to "shuffle towards the river" to make room for more people. How many? I don't know. I walked across the Sydney Harbour Bridge as part of Corroboree 2000 when organisers estimed 250,000 people and I did not doubt the number at all - people just kept coming for hours. I was in Sydney for the march against the Iraqi War when it was an estimated 100,000 and I think that could have been conservative. So I don't know: but if organisers say 175,000 and the critics say 150,000, what's the diff. The simple fact was that the city was jam-packed and tied up with crowd upon crowd of good-natured by determined to protest people.
Posted by Unknown at 2:24 pm