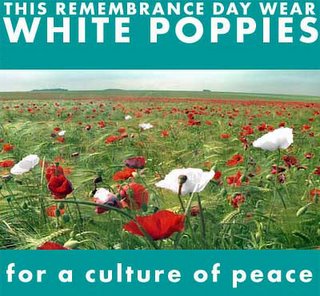 In all the remembrances of war, I don't think sufficient remembrance is given to those who oppose war. In democratic societies - and these are the only polities in which such opposition can occur - those who oppose war serve a very important function. Their cause against war seldom triumphs - but they can be a warning to politicians and to wider society that there are dangers in militarism and its triumphal takeover of society in times of hostility.

I think of the hundreds of thousands of people in Australia who marched against the war in Iraq. They disbelieved the propaganda about weapons of mass destruction. They got it right. The politicians from Howard down got it wrong. Is credit given for this? No. Does the Prime Minister apologise and say I should have listened to you? Resounding no. When all the soldiers come home the nation will be expected to stage welcome home parades. Where will the recognition be for those who warned - and were right - of the dangers both political and humane in military aggression?
Posted by Unknown at 6:46 am